This is a special piece of writing coming from the heart of our guest contributor Mihir Wairkar. Read on about his thoughts about walls, graffiti and people’s minds.

Walls are structures built to protect interiors. Elevated to the height of one’s ego, they are made with materials ranging from the gaze high up the sky to the palm that blocks the sun while you gaze. Nowadays, people purchase ready-made structures from those who keep gazing at the sky for a living. The life of a wall depends upon several factors. Largely, it depends upon the quality of natural or man-made raw materials used by the skillful hands that help construct someone else’s ego. Although, it also depends upon the amount of insecurity an individual possesses to determine the thickness or the quality of the wall. In my case, I was born during peaceful times, four floors above the ground. My beloved parents raised me within protective walls.

People live in houses, small enough to enter and exit at once. A friend of mine used to live in one of those. To reach his house, one had to go through alleys, which would seem to me like a maze torn apart from the world. He used to show me around the neighborhood. Open spaces, which functioned as playgrounds in the day and car parking lots in the night, stairways to houses where someone hung themselves, and places where their ghosts visited frequently. It wasn’t a flowery world like mine. This was the real world, where the smallest of the houses have firm walls built upon hopes and sky-high dreams. According to my friend, taking a dump would need a lot of patience and luck. There were no toilets in their homes, so one had to rush to the public latrines, early in the morning. They would stand in queues and wait for their turns. He used to hate that ugly block of concrete where he performed this ritual, for fifteen years of his life. The walls within would be adorned with explicit drawings, phone numbers and other commentary. Imagine taking note of new phone numbers everyday while you finally settle down for a dump. If one felt like it, he could maintain a toilet telephone registry.

One fine morning while he was on his way to that ugly block of concrete, he was surprised to see men, spray-painting the walls of the latrine. They seemed to belong from a different country. He was quite bemused and happy at the same time to witness the emancipation of the latrine. Like a good student, he questioned them about their origins and why they were painting this ugly block of concrete. That is when he was introduced to the world of Graffiti.

But witnessing the act wasn’t enough to him, and so with a burning desire to paint, he asked them for a spray can and like a happy child painted the remaining part of the walls. This must be it, he must have thought to himself. There came to life a new vigor with a sense of expression. Much different to the interiors adorned with explicit material, and so he followed the men like a bee savoring nectar from all the walls in his vicinity.

It is important to note that graffiti, which is considered to be a form of art and protest wasn’t really the force driving him to paint. But, it was mainly about exhaling the bad breath that took him so long to express. What’s even nicer is that he did it with passion and gave justice to it. 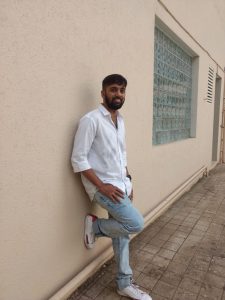 People who have built their walls on the basis of their ego would never allow someone to ‘vandalize’, as they put it. But then, there are those who would like someone to put layers of paint on their walls. I feel it is because they are the same children who were allowed to get their hands dirty in the mud.

Somewhere beneath the walls, lies mud.

Mihir Wairkar is a writer based in Mumbai. He has a formal education in visual art, although his love for writing has led him to take up interesting challenges. He is the author of ’An Object through an Object’; a book based upon his observations pertaining to how one perceives objects. Currently, he is honing his skills as a copywriter at Ideas@Work, Mumbai.