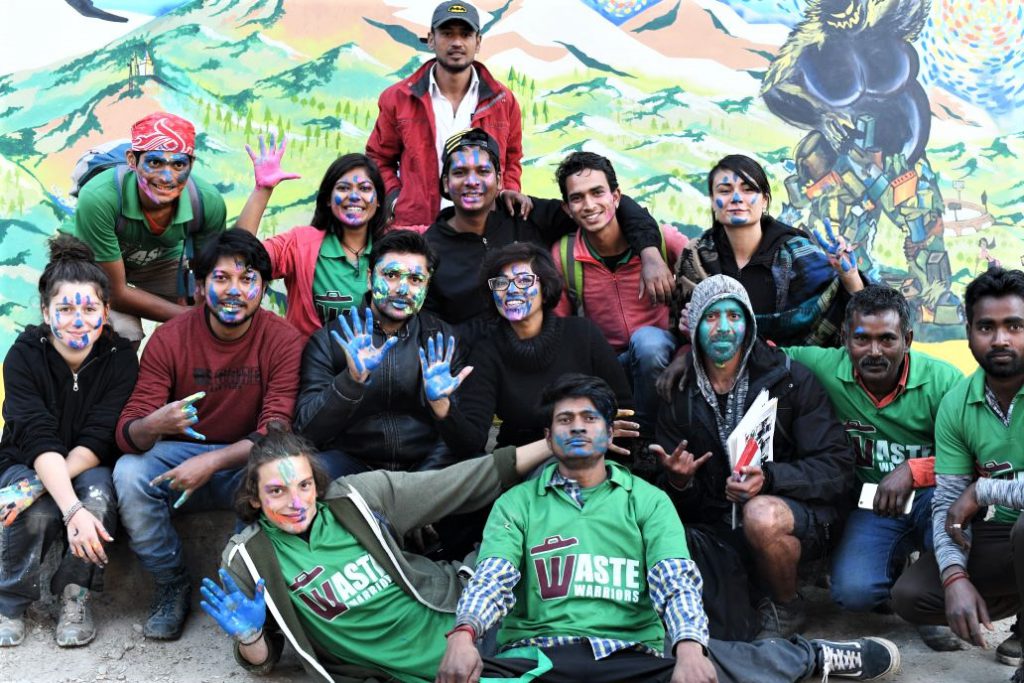 Street art should not just make a city’s walls beautiful, it should also add a meaning to the lives of the people it surrounds. In that regard, community painting is our best hope.

In October this year Wicked Broz collaborated with Waste Warriors, an NGO tackling the problem of waste management for the first time. Our artists Rashmil Vaidya and Prateek Sharma created Ambala’s largest mural at Kalka Chowk with the help of volunteers and local students. Two months later, we were invited to Dharamshala to do something similar.

Waste Warriors had only told us only one thing and that was to create something that would put waste management at the heart of the city. Prithviraj Mallick and Insane Strokes were the core of our team for this mission and decided to take on the challenge of an eye catching concept for a community painting.

We briefly studied the picturesque landscape and had intense brainstorming with the Waste Warrior team on what would be the ideal way to represent them. After a a few days of developing a concept, under the cold December sun of Dharamshala we set out to put our thoughts on a wall at Gandhi park next to the city bus stand. 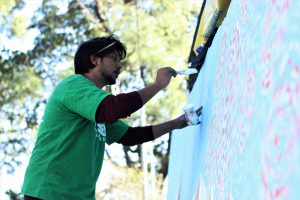 Prithviraj and Insane Strokes worked on all the outlining and detailing while a team of volunteers from Waste Warriors and some locals helped us complete this huge mural on a 50 x 10 ft. wall. The people of Dharamshala were taken by surprise as a wall that had for a long time been insignificant suddenly started coming into prominence. They were intrigued about this small story of a giant trash monster being tackled by Waste Warriors on an otherwise serene visual landscape of Dharamshala.

Passerby’s took special interest in our mural. A couple of Yoga instructors visited us for two days each evening taking updates and sharing their experiences. The vendors and policeman on duty around the mural kept our spirits up by offering their food and help every once in a while. Children took selfies of the WIP. Some local residents cast an eye on the art piece and advised us another location for such a mural. Some brought us samosa’s as we toiled on in the night.

On the final day, Waste Warriors organized a cleanup of the Gandhi Park and the neighboring Nehru park where everyone took part. 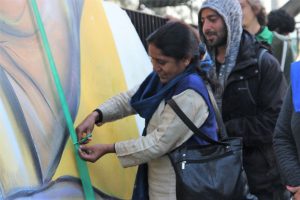 By the time the Mayor Rajni Vyas inaugurated Dharamshala’s largest mural on the 22nd of December, the message of the mural – We can still keep the city beautiful! was loud and clear to everyone who passed by. The city was a clean and green paradise a few decades ago. With indiscriminate new construction and a slow response to it by the local waste authorities Dharamshala is now giving birth to trash monsters as more and more tourists head to the hills for respite from their daily lives.

Not only that, we also created a small dedication to mother nature with a beautiful portrait by Rashmil Vaidya on the Sun N Moon Cafe at Gallu and added some zing to the existing Waste Warriors mural at the Himalaya Tea Cafe at Dharamkot.

Art can make dull walls look beautiful and art can inspire, but it is the people who must take action to salvage the situation in one of India’s most popular tourist spots.

Watch out for a video story of our journey.

This is just the start. Many more such community painting projects to come.

Special thanks to Rahul Makkar, the operations manager for Waste Warriors Dharamshala. Without his support this experience would not have been possible. Rupsa Sarkar for her wonderful advise and photography. Jodie Underhill and Avinash Pratap Singh for their valuable guidance. Volunteers: Aslam, Ketan Pandkar, Jyoti, Shanelle, Mansi, Som Wolf (UK), Vicky, Varun, Fredrico and Gaida (ITA).