Mumbai is fast becoming a hub of graffiti artists in India. I say this not because Wicked Broz was born here but because of the sheer number of graffiti artists who make it a pit stop during their travels in India. The year 2017 was great for spreading wickedness in the unlikeliest of places. Apart from a whole lot of graffiti in nearly every locality in Mumbai, we painted hotels in Delhi, did murals in Ambala and Dharamshala for Waste Warriors and as a cherry on top, Aadarsh Nagar came along.

Aarey forest has been home to indigenous tribes for centuries. But soon usurpers came along under the cloak of development, as has happened all around the globe throughout history, these tribes got relocated in the city and ever since have been living in impoverished conditions in places like Aadarsh Nagar, which ironically means ‘ideal town’.

Nestled between a bunch of societies on Military road in Marol, Adarsh Nagar is walking distance from Eco-park society, the headquarters of yours truly. The first time we painted in Adarsh Nagar was two years back when our friend Buyu paid us a visit and we were looking for a spot. Our brother Shailesh Sailkar, who is a popular figure in the area, helped us out. We were happy and promised him that we will be back again.

What started as a promise to a friend two years ago, ended up being a full blown community based art project. For over a month, we had graffiti artists coming down from Chennai, Germany, Australia and Uruguay helping us bring our dream to a reality.

Tattoo and graffiti artist, PERS was in India for the Pune Tattoo Festival 2017 With some extra time on his hands, he contacted the Wicked Broz, for a wall to paint and we were more than happy to oblige. PERS started the task with a sleek ‘ Power ‘ Piece. 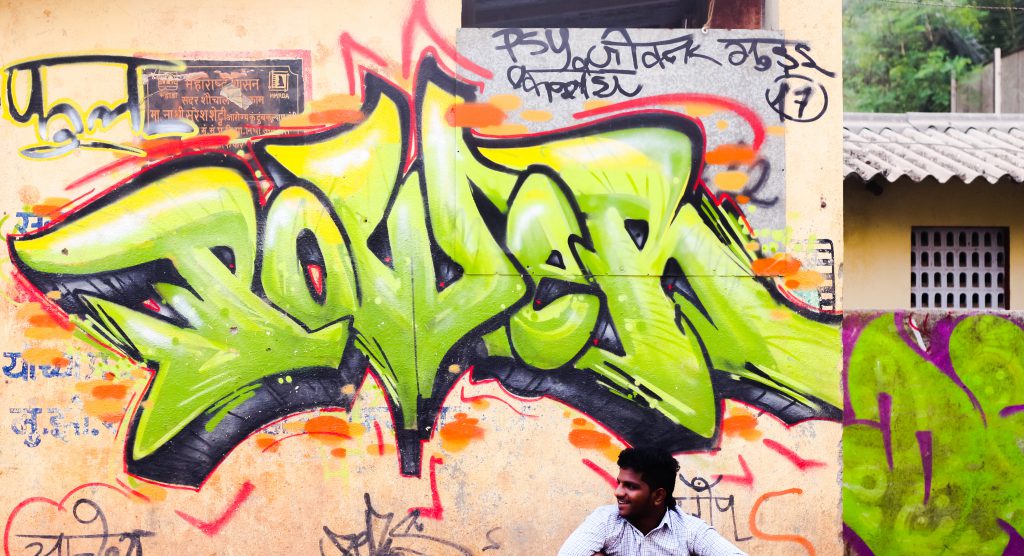 Next in was the Australian Graffiti Legend – Phibs. A little about Phibs :

Phibs uses a complex wildstyle graffiti that incorporates interwoven and overlapping lettering and characters. By the time Phibs headed back to Australia, he had pimped up a dead tree, painted a Ganpati Temple, 2 classic pieces and a psychedelic artwork. 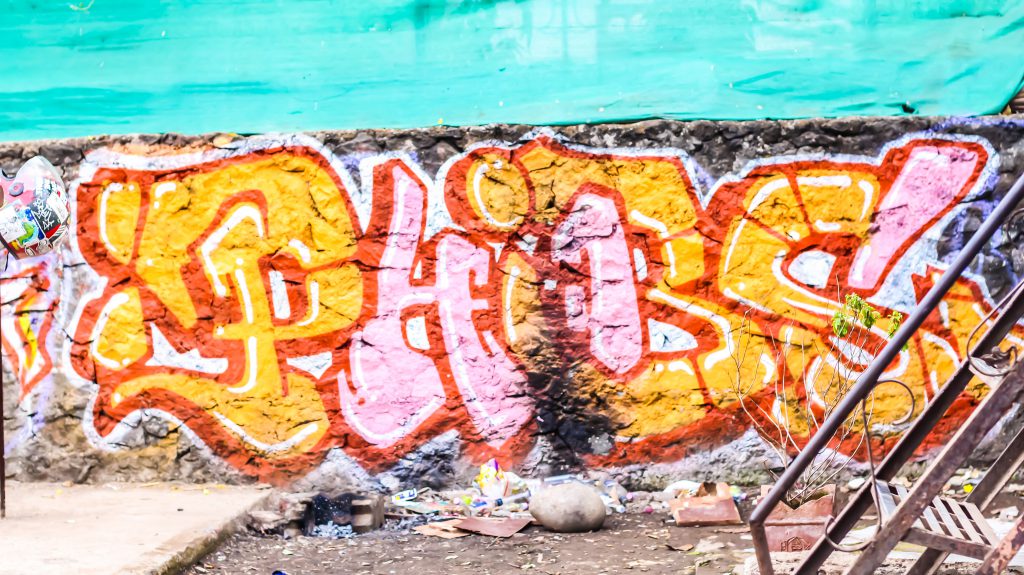 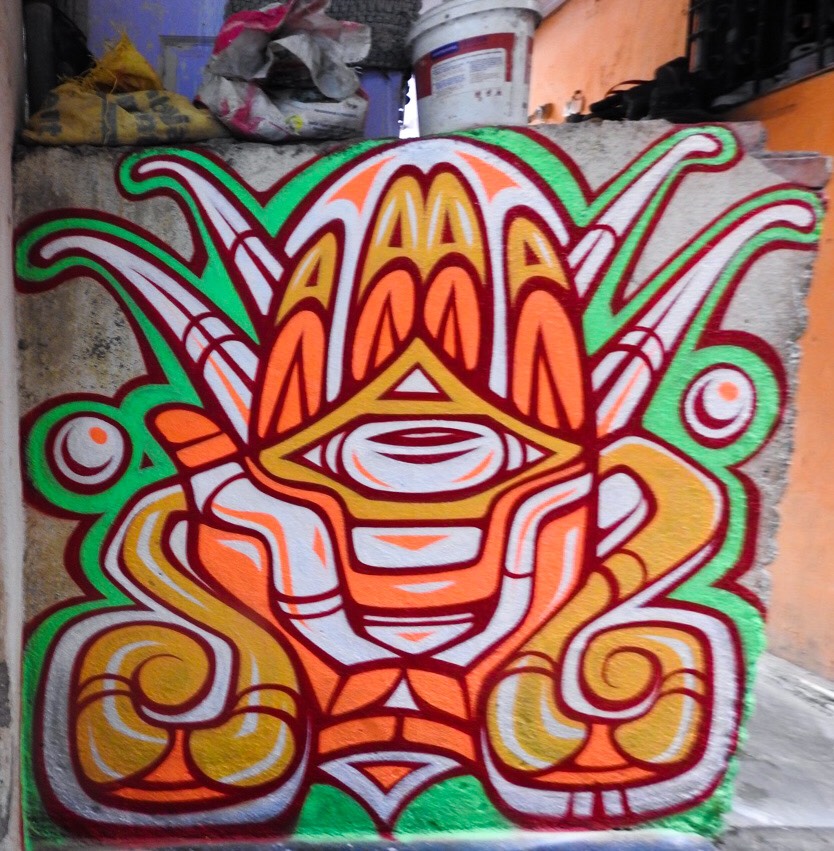 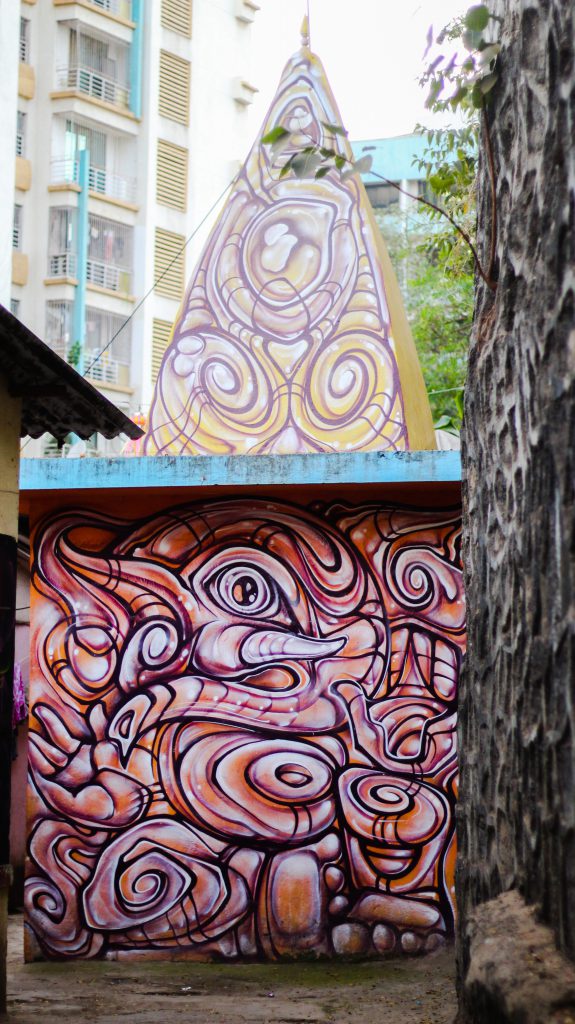 Sazar, another Australian writer who was in India to chill with his wife and son who live in Gujarat. Sazar has visited India a number of times before and has painted at jams with graffiti artists Zake, Nme and Mooz. At Aadarsh Nagar, Sazar set the walls on fire with some flaming letters in his trademark style.

Next in was the Chennai crew, T3K. Akill   has been doing graffiti for over 5 years in India and abroad. He got inspired while completing his  graduation in Malaysia, where he had the privilege of learning from the Malaysian Godfathers of Graffiti. At Aadarsh Nagar, he started off with a portrait of the iconic Ali One-way, India’s first 5 year old BMX Rider. The wall was graced by Ali and his Guru, Pravin Habib from Team 8e.

Akill finished off with a mind blowing portrait of a man he had clicked during his travels.

Next up, Epoch  from T3k , got done with his graduation in Aerospace Engineering this year, but has been painting for over 3 years now .At Aadarsh Nagar, he went Jurassic with a saber-tooth skeleton character. 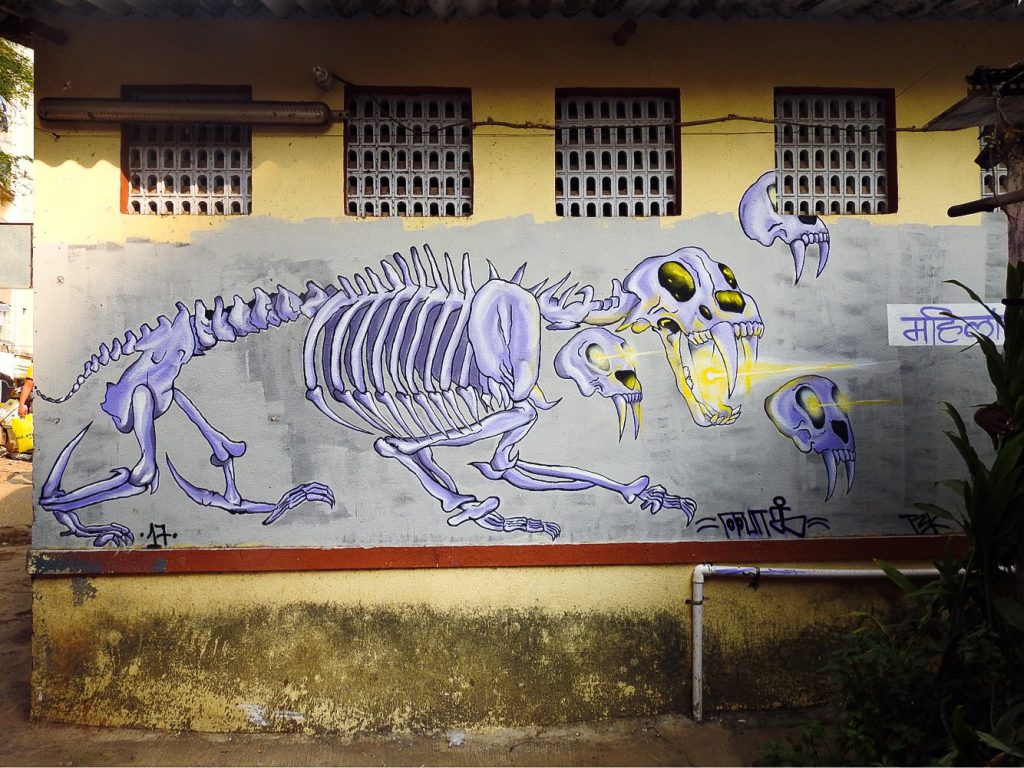 Dibs , the founder of T3K or ‘ The Third Kind ‘ crew couldnt let his crew mates have all the fun, and was on the crime scene soon enough. We saw Dibs go all out with 2 graff pieces, one of them being tamil letters. 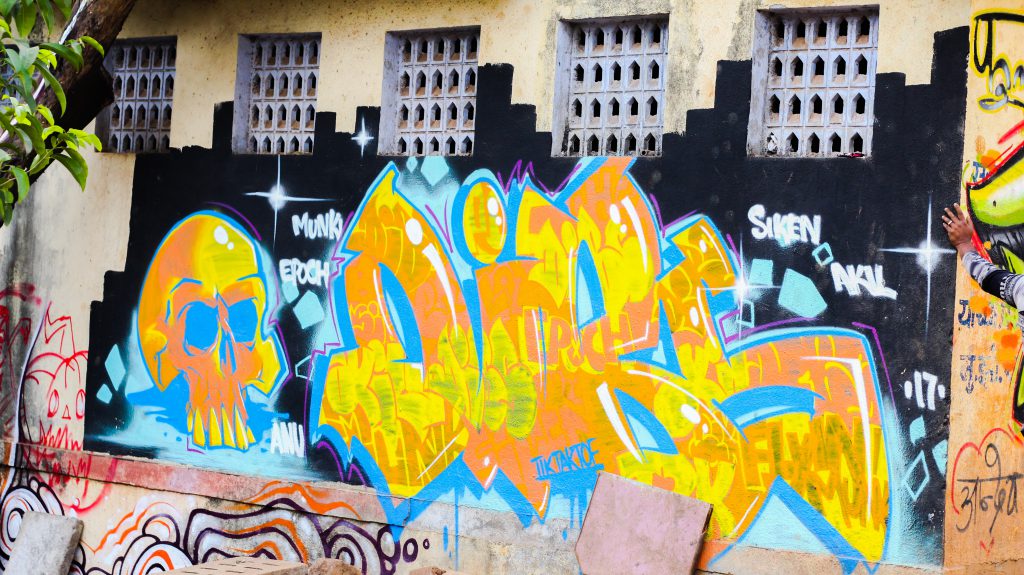 Next in were the Uruguayans, Federico Veiga and Elis Montagne.

Frederico was in Mumbai to paint a Gandhi portrait at Mood Indigo 2017 at IIT Bombay.

Over his career he has painted a lot of portraits , from Jimi Hendrix to Andy Warhol, in his own unique style with bright splashes of colour. In Aadarsh Nagar, he  used the worn out wall texture to paint an amazing Dali portrait.

Elis, who does a lot of workshops in schools and communities all over the world,  involved the kids and the ladies from Adarsh Nagar to paint the community well with fish and mermaids using masking tape. It was amazing to have the whole community get involved and of course get their hands dirty!

Last but not the least we had our very own Zake and Lobster finished the job with 2 quick throwups, and make Adarsh Nagar a complete art exhibition with a wide variety of  styles graffiti represented. 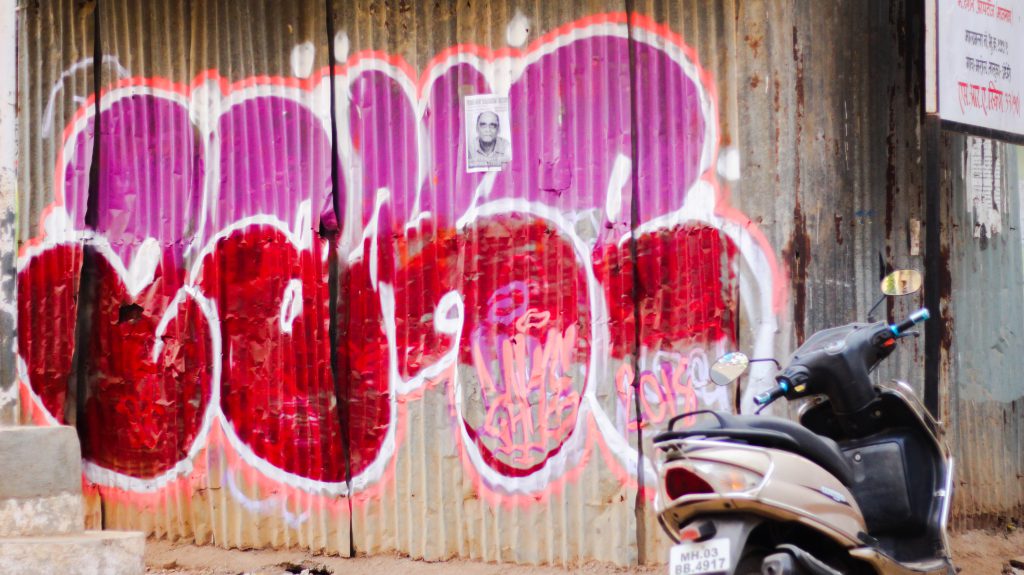 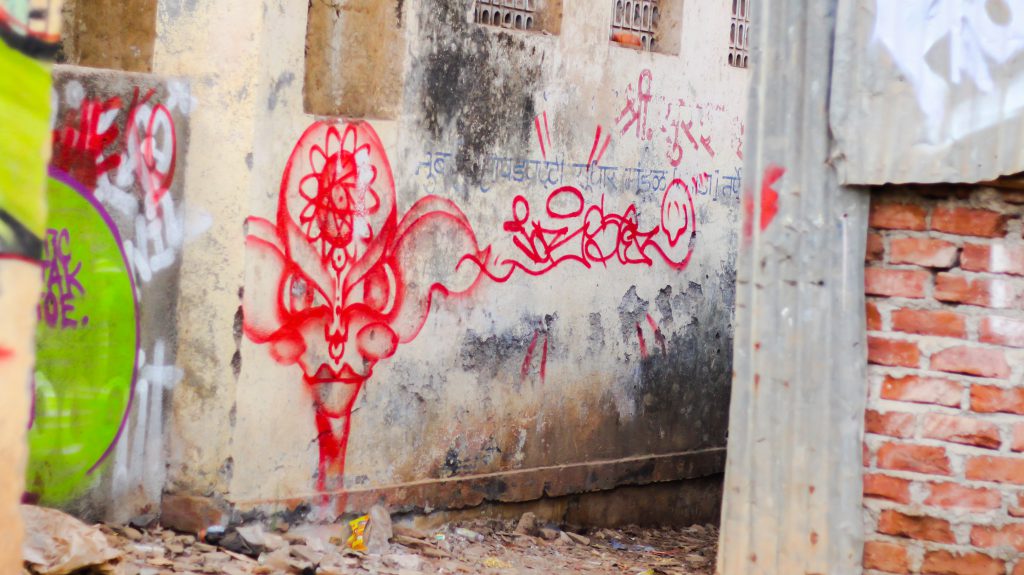 As fun as it was, we could have never managed to do it without the total cooperation of the kind people at Adarsh Nagar, primarily our  friend Shailesh Sailkar (Below: me and Shailesh).

As the painting progressed, the youth started a massive overhaul of their community ground. Just days later there was a inter community cricket competition organised in Adarsh Nagar. A few days later, the youth started practicing Kabaddi and have been doing so diligently everyday complete with rigorous training and prayers before practice. The change has been very heartening and in the new year propels us to keep painting more dreams for our friends in Mumbai.

Art, since the beginning of time , has strived to be independent,  without a greater purpose. Self expression itself aims to serve as both,  the path and the goal . It is through the perceptions of people of various ages and backgrounds that a meaning and an external purpose gets associated with the artwork. After this 2 month long roller coaster ride in Aadarsh Nagar, one thing is clear ; The kids now understand art, graffiti, the purpose of art and the effect it can have on a community.  This gives me tremendous hope , that our dream to inject art into everything , is slowly and steadily beginning to shape the young minds for a future with an environment conducive to free thought and uninhibited self-expressionism. 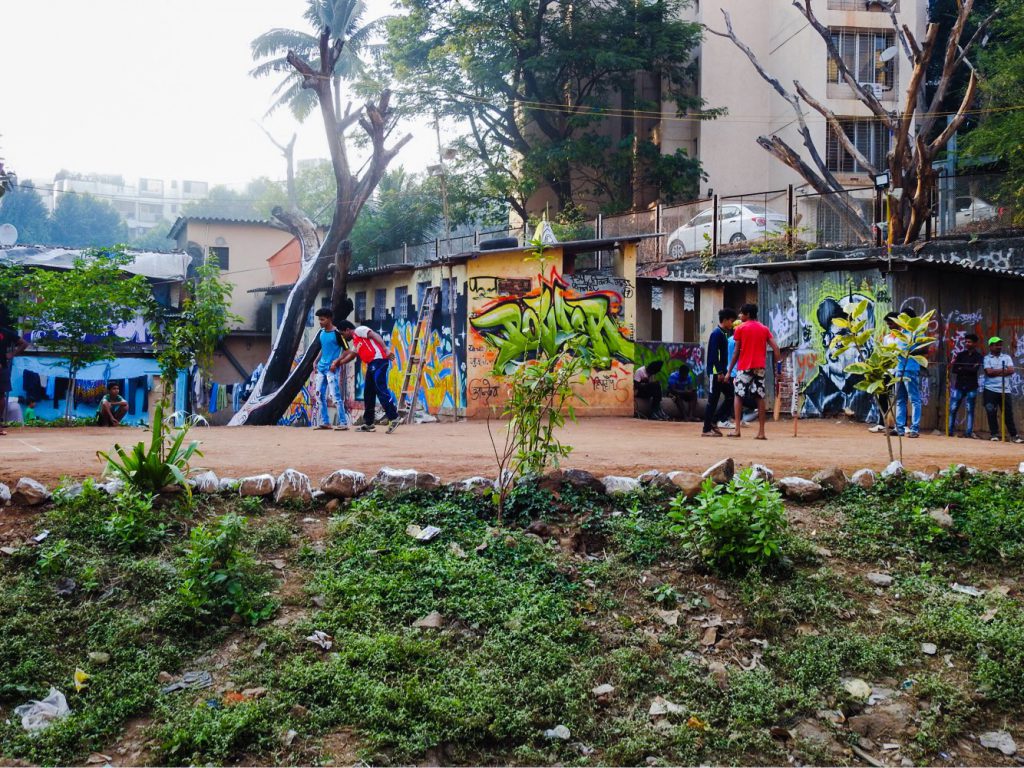 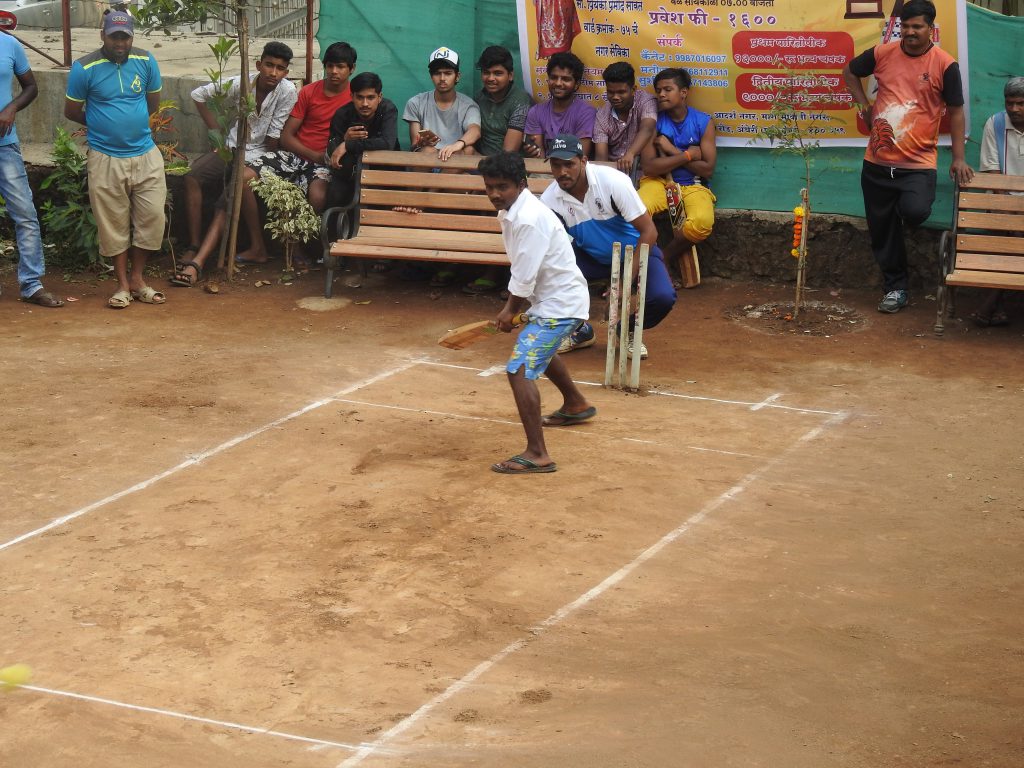