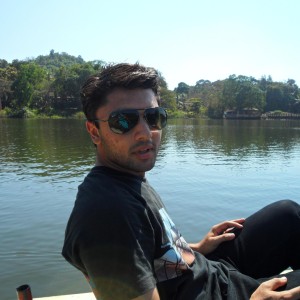 What Does Omkar Dhareshwar Really Think? – An Interview Of The Wicked Broz Co-founder

Omkar Dhareshwar, the face of Wicked Broz. Like literally. Sometimes, when I stare too long at Bob, I can see Omkars almost uni brow face in that wicked smile.

I first met Omkar in 2009, when he turned up for trials for our college football team. I was the captain and I found him one of the better players in his batch. He was recruited and with his style of play and positioning was immediately likened to Rafael, the then star right back at Manchester United.

Over the years, I discovered a lot many similarities between him and me. Right from our obvious short height, to writing poems, being intellectuals of the batch who flunked a year, being part of The Family (our close circle of friends in college), to having an entrepreneurial spirit and ready to plunge into the world of art.

It’s an honor to have him featured on our blog after having collaborated with him on so many projects.

1. What is Wicked Broz? How do you name an art company like that?

Wicked Broz is the brainchild of my college mates and I, while we were studying engineering in Lonavla. We basically began with a mission to add art into our lives, and the lives of others around us. What started as a group of engineers painting empty wine bottles, eventually snowballed in to the art movement it has become now!

Well, there are a couple of versions behind the naming of our company!

The basic idea was that we were doing a lot of things in college which people would consider as anti-social or wicked. Things like bunking college, having non-conformist views, and in general our rebellious attitudes put us in the bad books of almost all the authorities and students in our college.

Wicked Broz was our way of showing the world that we too can do good. And we will do good, doing the very same things which made you think we were wicked in the first place!

As Zake puts it rightly in our very first video ,

“Graffiti is something that society views as wicked, and we wanna change that perception. No, I’m just kidding! We always wanted to be wicked!!! “

2. You are a mechanical engineer. What was it that pushed you into creating an art company?

Yes. Actually, not a lot of people believe me when I say I had literally no interest in art all my life until the final year of college. In 2014, a friend of mine was opening up a Pool and Hookah parlour called Qroom in Khandala. I was not a fan of attending college, so I offered to help him do the interiors. While taking up the gig, I had no idea what a mammoth job it would be! We made everything there using trash. Furniture, lighting, tents, decoration, you name it! We even made the hookahs ourselves.

At the end of the strenuous journey of 2 months, the job was finally done. That feeling of standing in front of something that you created and to see the fruits of all the sweat and effort you put in is just indescribable. I was hooked.

Also, in retrospect, my mother is an artist. She has a tremendous collection of art collectibles and curios all around the house. Growing up in such an environment must definitely have had a huge impact on me, although on a subconscious level. My Dad is a marketing and sales whiz. So, it’s no surprise that Wicked Broz was a mix of their qualities.

3. Tell us a bit about other members of Wicked Broz?

Well back in 2014, there were 4 of us viz. Chahat Zaveri, Prithviraj Mallick, you and myself.

Since then, you and I have taken over the mantle, where you handle Marketing and I handle Operations. We split the sales part.

We also have a team in place dedicated for Marol Art Village. This team consists of local artists, local businesses and our ‘ever young’ friends at Military Road Resident’s Association aka MRRWA.

Wicked Broz has recently hired 2 artists – Prasenjeet Bordoloi and Dheeraj Singh aka Krypt.One. They are both highly dedicated, and are in the midst of learning to handle projects and manage teams. Our motley crew of commissioned artists starting from just 3 in 2014 has now grown to over 50 artists in India and abroad. This number is rising now on a daily basis.

4.Who have been your favorite Indian artists you have worked with?

Well, there are so many! Starting from Zake, NME, Mooz and DIS Crew, Chennai stalwarts Epoc, Dibs, Akill. Then there is a host of other brilliant artists like Afzan Pirzade, Aftab Ahmed, Bhuppi, Rashmil Vaidya, Mayuresh Ambekar and the list goes on.

5. What was the lowest point in your Wicked Broz journey?

To be honest, our entire journey is filled with low points!

The very first job I did was at Qroom, which was demolished a week after the opening.

The first graffiti jam we did at Eco Park clubhouse along with the fine Brazilian artists of Keep It Real crew, was repainted within a month.

And I’m sure you agree with me when I say that every single Public Sector project that we’ve done did have amazingly low points while in progress.

I’ve now come to believe that its our low points that make the high points so special. I do feel emotionally attached to each of those low points as it helped us grow in leaps and bounds.

6. What have been your major achievements as Wicked Broz?

Each and every project that we have done over the years have been major achievements as I see them. If I had to name a few, they would be:

7. Why haven’t you decided to become an artist yourself?

I am an artist. I write, make illustrations and create music.

That being said, I think calling myself just an artist would be highly understating my abilities. I am exceptionally good at getting people together and more importantly getting them to work with each other.

I would define myself as an ‘Artivist ‘rather than just an artist.

8. What was Marol like when you were growing up? How has it changed?

I have changed 10 houses between Delhi and Mumbai since I was born. However, my memories of Marol have always been my favorite. Marol used to be a calm and peaceful neighborhood with lots of greenery. As a child, I would go on long walks with my father through Aarey. Bharatvan at the time, was a massive piece of rock with hardly any vegetation.

After returning to Marol after 8 years, it was overwhelming to see what it had become. A lot of good things have happened viz. the improvement in the garbage collection system, the road widening, the conversion of Bharatvan into the mini rainforest that it is now, the accessibility for a wide range of goods, and the sheer improvement in safety.

Development, however good it may be, always brings along a lot of uninvited visitors. These include the massive sprawling residential complexes which have sprouted up, and along with them the insane traffic snarls.

9. What activities are you planning to develop at Marol art Village?

Marol Art Village is our baby. And like any proud parent, we want to see it grow and evolve into a responsible, independent and self-sustaining being.

We plan to develop Marol Art Village into a one-of-a-kind experience zone. The foundation stones for the same are being laid currently through Writer’s bench, rap circle, guitar jams and slack line sessions every Sunday at Bharatvan. We are working towards getting permissions to overhaul the property soon with proper security, a skatepark, a climbing wall and a lot of other initiatives.

We are also working on getting all the schools, religious institutions and other local organisations on board. The end goal for Marol Art Village would be to paint every single wall , involve all the local residents in the activities and get permissions to develop Bharatvan into an art and nature museum.

10. What is the future like for you? Do you have plans beyond Wicked Broz?

I see myself helping even more talented Indian and international artists, and replicating the Marol Art Village model in other neighborhoods around the world.

Wicked Broz has always been a vehicle for me to do things that I am passionate about, and which drive and excite me. In 5-10 years, I’m sure that different things will excite and drive me. And, I see no reason why Wicked Broz would not be able to provide me the opportunity to engage in them.

Wicked Broz has withstood the tests of time through its various stages of evolution, over the past 6 years. I am confident it will stand tall even in the future and be a guiding light for all the generations to come.

And ladies and gentleman, that is in a nutshell, Omkar Dhareshwar. The eternal optimist. The guy who has kept me inspired to be associated with Wicked Broz through all these years, even when I had thought of quitting on a couple of occasions. From being a player in my team to being a co-captain of a ship we stear together. 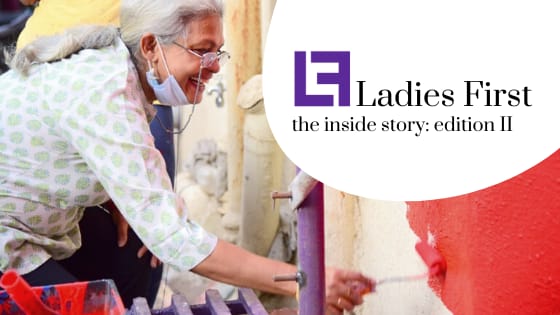 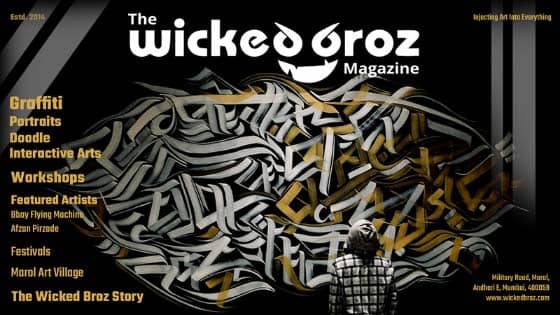 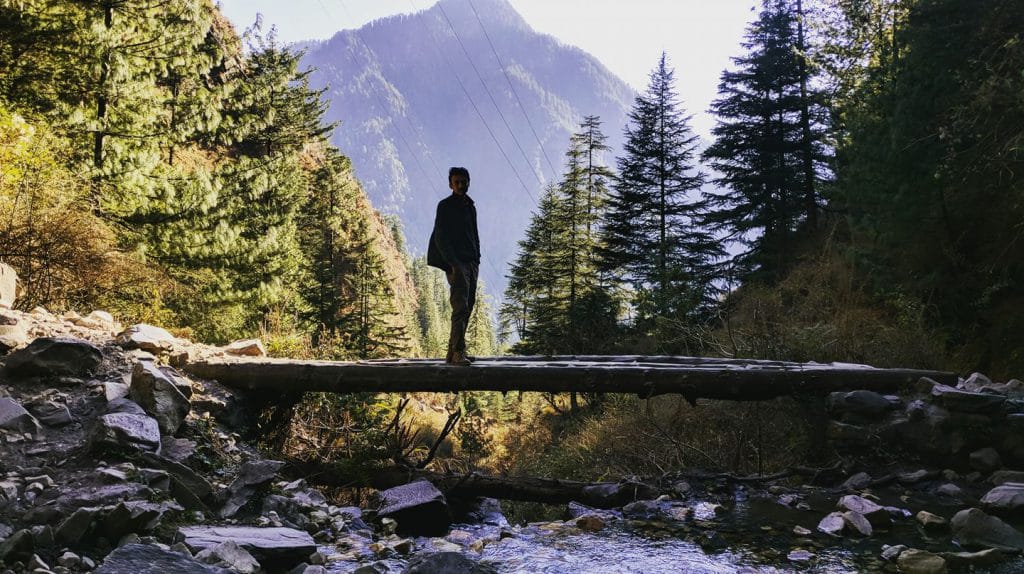